I am on a roll today.  I mean I’m getting a lot done.  Or as Rob would say, I’m “settin’ ’em up and knockin’ ’em down.”  I’m traveling to teach a new course the week after next, so I’ve been working to learn the material, and I have to say that I’m very proud of how disciplined I am.  So, to reward myself I thought I’d indulge in some chips.  Bad, bad move.  These particular chips are impossible to stop eating.  I challenge you to try eating just a handful.  There is absolutely positively no way you’d be able to do it.  Here are said chips.  You can buy them at Costco, but I strongly suggest you don’t, because you will eat half the bag in one sitting. 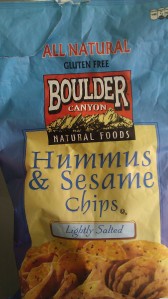 The good thing is that while I was mowing down half a bag of chips, Jack and Kitty were just chillin’ together.  The photo is a little blurry, but you get the idea.  I’m pretty sure he’s just trying to kiss up to her so she’ll let him eat all of her food.   Pretty sure that’s exactly what he did this morning. 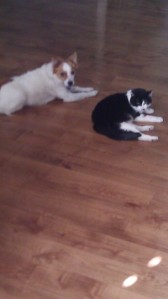 So, chips: bad.  Jack and Kitty: good.  The funny?  Yesterday Stevie had a treatment at Primary Children’s Hospital, so we were there all day.  We had to share a room with another patient (you know, there’s a lovely curtain in between but you can hear every word they’re saying).  The little girl was not behaving so her mom told her, “If you don’t start minding me, Grandma’s going to spank you.”  Apparently Grandma’s spanks are scarier than her own?  Anyway, on our way out of the room for a little walk, Stevie turned to the mom and yelled, “YOU SAID SHE WAS GOING TO GET SPANKED FROM GRANDMA!”  Jess and I were like, “shhh.”  But Stevie was so proud of herself for saying something and quickly responded with, “I remembered!”  She was really happy with herself for remembering what the mom had said so she could remind her of her terrible parenting.  She’s one of a kind.

3 thoughts on “The Good, the Bad and the Funny”