We took Jack on his first camping trip to Zions for Memorial weekend.  We took him for a few reasons: 1) We didn’t really have a dog sitter available, 2) We needed to find out if he liked camping (we are a camping family) and 3) We thought it would be a lot of socialization/rehab for him.  And guess what?!  It turns out he loves camping and he is making HUGE steps in his rehabilitation.

Rob knew that this camping trip would require a lot of him.  I’m just far too nervous with the whole biting issue, and I know Jack senses that when he’s meeting someone for the first time.  So, Rob did all the introductions (which means lots of treats for Jack).  And other than some snapping at our nephew, Dylan (getting used to kids is going to be awhile) and then a weird incident with our brother-in-law, Heath, he was a rockstar!  He was off the leash a ton and the majority of the time came right back when he was called (he also looked at us and kept going the other way a few times to be a shit).  No, he’s not done with his rehab, but he is so on his way.

Once I know that Jack is calm and OK around someone, then I am too.  I am so grateful for Rob and his calm nature.  Perhaps with a prescription of Xanax I could be mellow as well.  I’m just the worried mom though, and I’m learning alongside Jack to take a deep breath and relax.  Just look how chill the guy is here. 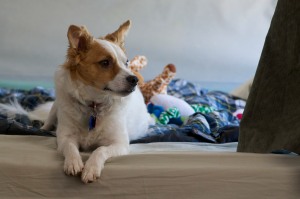 Jack chillin’ in the trailer