Today is May 1.  Two days ago it was close to 80 degrees and sunny.  Today, it’s SNOWING!  Which, by the way, none of the local meteorologists knew anything about.  In fact I just heard one of them say, “Well, there may be a few flurries going on right now.”  Ummm it’s a full-on snowstorm at my house!  Weather has been a heated topic on this blog.  As seen here.  And listen, I know that complaining doesn’t do much, but I cannot not say something about it.

Lately I’ve been thinking a lot about maybe not staying in Utah forever.  So, maybe it’s time I stopped complaining about shitty weather and moved some place where I won’t have to.  Easier said than done, right?  I mean if I keep doing the whole freelance thing, I can technically live anywhere that provides me with a decent airport nearby.  Rob’s job is a different story. I can dream though.  Hell, maybe I can do more than dream.  In fact, Rob, my brother and I have kind of a brilliant plan to simplify our lives and live more sustainably.  I’m not going to tell you, because we’re still working out the details.  Trust me that it’s brilliant though.

The thing is that I want to be a bit of a dreamer.  I don’t mean that I want to be unrealistic or irresponsible.  I just mean that I want to do more than just talk about an idea.  I want to do everything within my power to make it happen.  And if it doesn’t, at least I tried.  I’m that person that sees a documentary about someone making a dramatic change; someone living on their own terms, and I’m inspired beyond words but all I do is talk about it.  I’ll tell everyone I know how great the film was and say things like, “Why don’t we do this?”  And then I do nothing.

I’m feeling the need to try.  And I know you have no idea what it is I’m even talking about, but send your positive energy my way.  I promise to do the same in return.

I know I sound like a broken record, but ENOUGH with winter!  Yesterday morning we woke up to it snowing AGAIN, and even though I knew it was coming, I was still pissed.  Winter is just too damn long in the great state of Utah.  Winter is fine for December and January, but then I am done.  Done, done, done and done.

You know what would be really sweet?  To live some place where when you wake up in the morning your boogers haven’t turned to concrete in your nose from the insanely dry air.  That would be rad.  Picking those things out is not easy, people. They get so bad that it hurts to flare your nostrils the littlest bit.  Think of it as trying to pry off a piece of wax that has been sitting for way too long on a sensitive surface. I’ll let you come up with your own sensitive surface.  It should probably be one that is covered with hair.

Speaking of hair, the winter weather has not deterred Jack from digging deep into the snow, finding a turd and then rolling his hairy body in it.  He surprised me with a poop neck just this afternoon. Here’s a picture Rob took of him in the summer. Don’t feel bad for him because we’ve exposed his secret to the world.  I’m pretty sure he could care less.  Considering he is rolling in his own poop, remember. 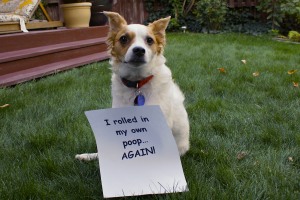 He just can’t help himself.

Remember summer?  That was fun, wasn’t it?  You walked your dog with only one layer of clothes on, lounged in the backyard with a San Pellegrino lemonade and ate dinner outside every single, glorious night.  That was really nice.  I liked it.

Fast forward to January 23.  The typical high temperature is around 20 whopping degrees, all you can think about is how to stay warm inside and out and you are almost positive you have seasonal affective disorder.

I know, I know, I keep talking about the weather.  I have lived in Utah my entire life; you’d think I’d be used to this.  No one gets used to smog so thick you can taste it or temps in the single digits though.  Ok, maybe some people get used to the cold. Let’s be honest though; those people are weird.

What do you other cold weather folks do to beat the winter blues?  Warm weather friends, need not reply.  Unless, of course, you would like to invite me to stay with you until May.  That’s an option.

Remember me mentioning that it’s been cold as shit in Utah?  Well, it’s still cold as shit.  It’s the big topic of discussion ’round this place lately.  And for good reason. The air sucks and we’re hitting record lows.  When the high temperature is a record low people start to get pissed.

I decided to put together a Top 10 list called “You Know It’s (stupid) Cold When…” Here’s what I’ve come up with.  Feel free to chime in with yours.

I’m telling you, it sucks here right now.  Mexico anyone?

I’m sitting here at a Starbucks in Harlingen, Texas.  If you’re not familiar with Harlingen (is anyone?), picture the tip of Texas.  Can you see it in your head?  That’s where I am.  As far south as you can get.  Are you jealous?  I thought so.  There are a lot of big hats and big trucks here (I know, I know, everything is big in Texas).  Oh, and lots of crosses as well as dashboard art.  And since we’re basically on the border, I thought for sure that the cop walking down the side of the freeway was totally involved in a border drug raid.  Unfortunately it was only a fender bender.

This morning as I was leaving the hotel the weather forecast sign simply said, “Hot and humid.”  I’m pretty sure they wanted to follow it with, “Shut up and get used to it.”  I’m definitely not used to this kind of humidity.  I mean I live in one of the driest states ever!  Our freeway signs talk about the danger of wildfires (the whole state is basically on fire).  In Texas they say, “Hurricane season is here.  Be prepared.” Which, I’m totally not.  Prepared, I mean.  Shit, someone tell me what you do in a hurricane.  Besides cry, I mean.

So far everyone has been really nice.  My first training session was full of people that felt so sorry for me.  I told them about all of the driving I was going to do and they got these looks on their faces that said, oh my god, you are going to be miserable. Instead they were like, “Oh wow.  Good luck.  Marble Falls (where I’ll drive today… 5 hours away) is really pretty.” I’ll keep you posted as to whether or not this is true.

I’m sorry that I’ve been so absent, but the weather has been freaking awesome, so I’ve been trying to spend as much time outside as I possibly can.  Today the weather sucks, so here I am.  Yes, “April showers bring May flowers.”  Whatever.  What does April snow bring?  Depression.  If I didn’t have a dog to walk, I would stay inside all day.  It’s one of those blustery, wet days that make you want to curl up on the couch and watch a movie.  Of course I would be watching Bridesmaids.  Why? Because this movie is fucking hysterical!  I can quote nearly the entire movie and yet I still want to watch it like every single day.  I mean how awesome is it that one of the Bridesmaids (Melissa McCarthy – the most hilarious one) suggests “fight club” for the bachelorette party?  And when everyone looks at her like she’s crazy she goes on to explain, “Yeah female fight club. We grease up.  Lillian doesn’t know, so we pull up and yell ‘Surprise, we’re gonna fight’ and we beat the shit out of her.” Please do yourselves a favor and watch this movie whether you’ve already seen it or not.  It will make you happy.

I could also just spend ridiculous, unjustifiable amounts of time on Pinterest.  Then I could pin recipes that have the words “three cheese” and “healthy” in the same sentence on my ‘Food, Glorious Food’ board.  I’m still trying to figure out how something with three types of cheese in it can be healthy.  I should probably stop looking at the recipes altogether because they just make me want to stuff my face with gooey, chocolatey things.

Speaking of not giving in to eating crap… my grandma told me she wanted to lose weight (she is so little though, so this is a silly statement), but then she said, “It’s not like I have anyone to lose weight for though.  Will’s (my grandpa) been out of commission for years.”  Yep, that’s exactly what my grandma said to me.  She never holds back, and I love her for it!  Of course I’m also scarred by it.

Oh, and since I’m on a roll of changing from subject to subject, I have something very funny to share.  My niece, Stevie, whom I’ve mentioned on a number of occasions has started spreading rumors about me.  The other weekend my sister and her husband went away for their anniversary, so Grandma and I were on duty.  At school on Monday her teacher asked her how her weekend with Grandma and Aunt Sonie was and Stevie responded with, “Aunt Sonie kicked my ass.”  I actually didn’t (that weekend), but I’m sure I wanted to on a number of occasions.  Listen, she is very cute but very rotten.  You may have figured that out by the language she used. Isn’t she awesome?

I have no idea if Rob (“The Mr.”) is going to be OK with this, but does it really matter?  Every once in awhile he types up an Onion-type news article.  If you’re not familiar with The Onion, GET FAMILIAR!  It’s a fake news cast (online) that is amazingly well done and absolutely hysterical.  Rob and I always talk about how fun it would be to write for them.  Here’s one of his “stories,” short but perfect.  Oh, but before we get to that, please make sure you’re checking out the ‘daily observations’ tab at the top left of the page.  I post something there every single god damn day. Today’s will be there shortly.

A party broke out at WKYN television after a bored intern figured out that- aside from last Thursday’s shower and a few degrees here and there- their weather guy had pretty much accurately predicted the last seven days of weather.

“She’s right,” gasped Meteorologist Stan Martin after cross-checking the information.  “I can’t believe it.  I got ‘em all right!” he shouted to the crew.  “That cold front I predicted was just a stab in the dark.”